It's a Jungle out there! full-colour Comic Books for sale

Hagen Cartoons is proud to have three "Comic Books" for sale.

The books have been professionally printed right here in Australia using the fantastic services of Comic Books on Demand! 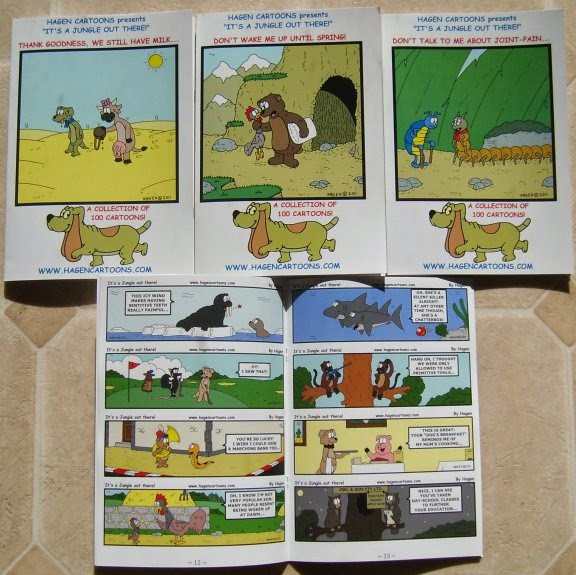 Hagen Cartoons will be part of the Australian Cartoonists' Association Stall, from 9am to 5pm on Saturday the 16th of August 2014 and 10am to 4pm on Sunday the 17th of August 2014.

If you are interested in buying these books, come the the Market or contact Hagen Cartoons through the website: www.hagencartoons.com
Posted by Hagen Cartoons at 22:12 No comments:

It's important. Will you sign it too? Here's the link:

Hagen
Posted by Hagen Cartoons at 18:26 No comments:

The Festival will run from the 27th of September to the 5th of October 2014.

Saint Just le Martel is a small village next to the town of Limoges in central France (400km south of Paris).
The festival mostly caters for single gag cartoons, editorial and political cartoons, caricatures and illustrations.

The festival has been around for over 30 years and attracts a lot of cartoonists from around the world as well as lots of visitors ( https://www.facebook.com/pages/Salon-de-lHumour-de-Saint-Just-le-Martel-Haute-Vienne-France/153040051376973 ).

Hagen Cartoons has been liaising with the Organizing Committee of the festival to set up the exhibition. The name of the exhbition will be: "Australian view of the World and Australian Humour" or "Le monde vu par les Australiens et Humour Australien".

The official opening of the exhibition will be on Saturday the 27th of September, at 11am, at Saint Just le Martel.

Fifty ACA Members responded to the call for artwork submission and a full list can be seen at http://www.hagencartoons.com/ACA_Saint_Just_le_Martel.html .

Four ACA Members will actually make the trip to France for the Festival, namely Eric Lobbecke, Judy Horacek, Ward O'Neill and Hagen Cartoons. Eric Lobbecke has kindly agreed to open the exhibition on behalf of the ACA. Two other ACA Members are still considering if they can attend as well.
Posted by Hagen Cartoons at 22:56 No comments:

Hagen Cartoons
Hagen is a freelance cartoonist based in Sydney, Australia. His "It's a Jungle out there!" cartoons appears in newspapers, books, company newsletters, etc... My website is www.hagencartoons.com